What's The Proper Chaser For A Glass Of Coke?

By now, most of you will have heard about Coca Cola's anti-racism training which featured a slide that simply said, "Try to be less white." It also included this gem which described what "being less white" meant. 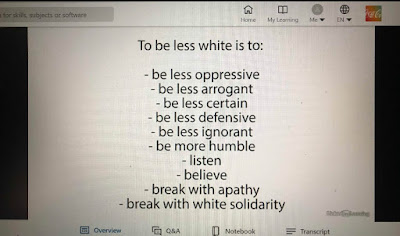 We haven't gotten to this point where I work, but we aren't far behind. I've read that same content on our internal websites, just not from leadership. It wouldn't surprise me if management began spouting it.

Where do you go after this? You can't stop because the problems you've identified - violence, illiteracy, poverty - aren't getting any better. None of this has an effect because the problems stem from family breakdown so nothing you do in this vein is going to work. I suggested that we might want to try Tarantism before, but that was a joke.

Seriously, how does this all burn out? Like witch mania, it has to come to an end because none of the desired effects are being observed.

One would hope that we would realize this was a fraud run by grifters and the perpetrators would face justice, but given the collaboration of the news media and corporate giants, I can't see that happening. Are NBC and Nabisco going to cop to being stooges for Modern Nazi Race Theory? I'd suspect that it's more likely it will gradually morph into a different grift and their culpability in the destruction of yet another generation of urban blacks and rural whites will be swept under the rug.

The thing that keeps me from giving in to my cynical side and thinking that no one will be punished is the Elites' even stronger desire to continue expanding the Epstein Library Empire.

Maybe it all ends with a religious revival. Who knows?

Kevin D Williamson of the National Review was on Garage Logic the other day.

He was talking about the decline of big cities, specifically Minneapolis.

Minneapolis has been ruled by Democrats uninterrupted for 50+ years.

One statement that stuck out to me was that he said that their still is a 2 party representation in these cities. The issue is that the 2 parties are mainstream Democrats and radical Democrats. And the mainstream is losing.

It's very true, people like Phillipe Cunningham and Jerimiah Ellison get elected why moderates thrown out.

By now, most of you will have heard about Coca Cola's anti-racism training which featured a slide that simply said, "Try to be less white."

As someone who has an even more traditional family history than you, I can only say you are full of fertilizer here.

MN, I agree with that assessment because I see it here in CA. However, I'm asking the cultural question. When do our movies and music and celebrity moralizing shift from Nazi Race Theory to family structure?

You know, since it's all fantasy, maybe it's the ultimate renewable resource.

Wanna know why we can't get rid of the witchcraft that holds us down? It's because the witches are invisible! They're all around us, but it's hard to detect them because they're hidden in plain sight.

I think that's how you end up claiming that we have implicit bias and use code words.

If you think a primary motivation to support other people in their need to differ from the bondage you have chosen for yourself is about supporting degeneracy for selfish motives, the fantasy is entirely of your own construction.