... that's what it seems like we're riding, thanks to the progressives who don't know how anything works.

Full Disclosure: I got out of the market last week. I took my S&P 500 investments, which had done very well this year, and parked them in Treasuries. I'm willing to miss out on some gains in exchange for avoiding any election craziness downside. And as far as I can see, we're in for some serious election craziness, again, thanks to the Democrats.

Why on Earth would you push the least reliable voting method on a heavily-armed population that has been stoked into white-hot hatred by a crazed news media? I don't see how this ends anywhere but in the Supreme Court which the press and the Democrats, but I repeat myself, tell their minions is invalid. Dig this. 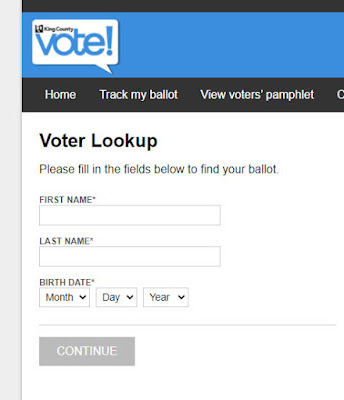 That's how secure your vote is in Washington and, as I understand it, Oregon. Name and birthdate gets you a cupie doll. Now dig this.

Not only that, but by continuing far enough you invalidate the ballot without any signature. pic.twitter.com/PSQN6HdGh9

The assertion is that you can invalidate anyone else's ballot simply by knowing their name and birthdate. It doesn't matter whether it's true or not or if you need slightly more information. It only matters that people believe it's true.

I can't say I'm altogether surprised. Biden's campaign screams that they are convinced they'll win by flooding the system with faked ballots. I've never seen anything so supine in my life. No one would run a real campaign like that.

That's not surprising, coming from a group of people who thought they could endlessly trash the cops and take away their self-defense capabilities and the cops would just sit there and take it. They've been shocked to see cops quitting in droves. They've also been surprised at the increase in crime. Like I said, they don't know anything works.

More proof of that is how NYC is being bankrupted with lockdowns and racial madness. The wealthiest 1% pay 50% of the city's taxes and many of those wealthy people have bailed out. From the WSJ in August comes this data point.

New York City faces a $9 billion deficit over the next two years, high levels of unemployment and the prospect of laying off 22,000 government workers if new revenue or savings aren’t found in the coming weeks.

Finally, there is the Hunter Biden story. The press is desperately trying to cover it up, just like the Catholic hierarchy tried to cover up the pedophile priests and for the same reason. They are determined to preserve their faith, their religion of social justice. They are fighting hate and racism which means that there are no rules.

If I had to guess at an outcome, I'd put my money on the election being bitterly contested in the courts. The press will push whatever narrative the Democrats give them while this happens. It will eventually go to the Supreme Court where the conservatives will determine the outcome. Perhaps during this process, but certainly afterwards, there will be lots of rioting in the blue cities. No matter who wins, places like Chicago and New York will suffer further damage which will result in further emigration.

That doesn't let you vote.

The guy misread it, and while yes, it does give you that warning-- that is on the page you can only use if you've specially registered to be able to print out your ballot, and then it warns you on the verification page that, basically, sending in two ballots can mess things up and you don't know hwich will be counted. (You'd think that is obvious, no? Doing all the legal steps needed to say "I never got a ballot" will make it so that presumably stolen ballot is invalidated.)

It just lets you see if you're registered, what you will be voting on, and the registration information such as "your ballot has been sent" or "we got your ballot."

I used this:
https://voter.votewa.gov/WhereToVote.aspx?ref=voteusa
when we lived in Washington, and since then to make sure my identity-- and that of my husband-- had not been stolen.

They finally removed our registration in the last six months, after several formal, legal requests.
(They mailed *two* ballots to my husband in Texas, because we were in the Seattle blob. Because I changed my registration to the dry side and their voting registration guys actually do their bleepin' job.)

If I had to guess at an outcome, I'd put my money on the election being bitterly contested in the courts.

Oh, definitely.
Even if they do somehow manage to cheat big enough to win-- and there have been a LOT of things hitting the news that never did before, like ballots for Trump found in the trash, and ballots never delivered because the post office worker dumped them with other mail in the trash-- it'll be in the courts.

The freak-out *does* make it so that it's more likely someone trying to cause chaos will know to do this, though.

Just to be clear, while I blame the Democrats for making the rules that I believe will lead to chaos, I have no illusions that the Republicans won't make use of them as well to wreck things.