... and that's saying a lot as it's the best of the bunch. CNN and MSNBC are simply intolerable.

Sitting with mom while she passes, we've been watching her favorite channel, Fox News. She's in a hospital bed in her living room with the TV right in front of her. It's a measure of where she is in life because she never watched TV and never stayed in bed. She was always out accomplishing something productive. There's even a scholarship named after her at a local junior college. She was that kind of woman.

Anywho, as much as I agree politically with mom, which is 90+%, I've discovered I can't stand Fox News. Even Tucker, whose speeches I love and whose YouTube snippets I devour with relish, is horrible to watch. I hate the whole circus. It's just rabid, clickbait panting. I want to be cooking or gardening or doing something, anything while listening to redneck music instead. I do like to watch football and soccer, but news shows where they sit at a table and discuss what Important People did today make me itch.

The Important People aren't important. You're important. What you accomplish is important. Screw what they think and say. You'd be far better off learning to make sauces or working out or praying the Rosary than consuming that trash.

After walking through the meaning of life on this blog for more than 13 years, watching those dingledorks yap is painful. At the end of their shows, no one is enlightened. The debt is still a tsunami off at sea, hurtling towards us. Kids from non-traditional homes are still screwed. Our now morally-untethered culture is still thrashing around in the dark, discovering new perversions to accept and praise. Meanwhile, people watch those worse-than-useless shows thinking something crucial is being said.

Last night, I wondered if social media and the search for eyeballs online and on screen, is a lizard-brain craving for which we have no antidote. Are followers and clicks and ratings the killer virus that will wipe out civilization?

Meanwhile, there are dying moms to comfort and caregivers to console and deceased dads to respect. Out of love for all of those and all of you, I'll leave you with this, a photo of a nun with a cat on her back. Details here. That photo is what life is all about in all ways imaginable. It shows love and sacrifice and piety and effort and so much more. Hurrah for nuns! Hurrah for cats!

Love you all. Have a great weekend. 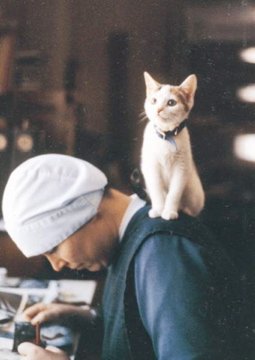 I can't stand most of the delivery.

The best comparison I can think of is scrolling text-- I am a fast reader (recently found out unusually fast-- was reading some quest text with my husband and he only got about halfway done before I was done, and figured he'd read it, and kept clicking through to his minor annoyment) and that stuff drives me nuts. I got it the first three times I read it, NOW TURN THE PAGE.

They spend a freaking HOUR on one. five. minute. thing.

Saying everything twice is bad, but when they go on repeating it a fourth, fifth, or even more times, I just want to reach into the TV and shake them. Now I get that they are trying to fill time, and they want to give those who are less quick to understand a fair chance to grasp it, but seriously...

It reminds me of some of the worst training I was forced to take at work. We called it “packing 10 minutes worth of information into an 8 hour class”.

Yeah, broadcast news in general is awful, I think mainly because of the format itself. I never liked TV or radio news when I was a kid, and it hasn't grown on me as time has gone by. Because it takes so long to say anything, they are reduced to what can be blurted out between commercials. The whole thing is, ultimately, about on a level with gossip, little bits and snippets being told not for information, but for its salacious value, and getting twisted and distorted as it gets said over and over again.

At least with text news, if I want to go back and re-read something to make sure I was following it, that is an option.