Have Some Sympathy For The Homeless

We have great weather here. Everyone knows that. The weather attracts the homeless. It attracts everyone and with limited real estate, rental prices here are crazy high - averaging $1700+ per month for a one bedroom apartment. Once here, the odds of a homeless person finding lodging is pretty small. They don't have the skills to get a job paying enough to cover rent. The end result is a chain of tiny tent cities downtown, looking like this. 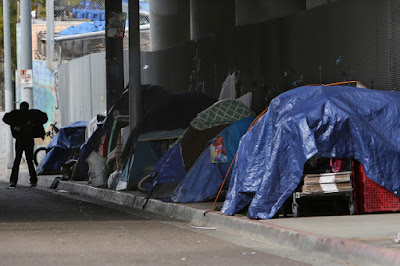 I don't go downtown that much since I don't volunteer at Catholic Charities any more, but when I did, I marveled at what looked like an REI sample lot. Street after street had tents on the sidewalk. One of our sons worked for a while downtown and every day he had to navigate the tents and residents to get to work.

San Diego has recently seen an outbreak of hepatitis among the homeless and tens of them have died from it. The response has been to erect a couple of massive tents to house and care for hundreds of them. Before you become outraged at that or blame one political side or the other, think about the financial aspect of it. San Diego real estate prices are very high which means the city is in the same boat as the homeless - no one can afford to create, permanent low-income housing. Thus, the tents.

When I worked at Catholic Charities, I met lots and lots of homeless people. These were people with low IQs, language difficulties, addictions, stories of serious hardship or abuse and mental illness in some combination. They were beautiful children of God like you and me, they had just rolled snake eyes in life and/or made some horribly bad choices.

There is no good political solution for this. There isn't enough money to give them decent housing and if you do, you invite more of them. For the most part, they aren't going to find jobs or get training to be able to afford San Diego rents themselves. It isn't conservative greed or liberal handouts, it's just the breaks in cities like San Diego.

This is why salvation is personal, not collective. While there is no large-scale, long-term solution, there is an individual one. We have Cursillo friends who know one of the homeless and take him in when the weather gets bad or when it looks like he needs a shower and clean clothes. At Catholic Charities and Father Joe's Village, volunteers take care of individual cases, funded by Catholics across the Diocese.

A friend of mine is a recovered homeless drug addict. When I asked him if he gives money to homeless beggars, he said, "No way. I'm not buying some guy's drugs. Instead, I buy them food. Try going into a McDonald's when you're homeless. The stares, the whispers and the ostracism is terrible. Get the guy a hamburger instead of cash."

You can't vote to solve the problem universally, but you can solve one person's problem, at least temporarily.
Posted by K T Cat at 7:17 AM

I give money to them sometimes. Though my life doesn't take me near the homeless too often. Also here in the Twin Cities, there are a lot of street corner beggars that do it "professionally" and reportedly make a good living. I've watched one show up at the corner in a better car than mine.


I also fondly remember seeing one homeless guy, carrying everything he owned, up and down Sunset cliffs when I lived in Ocean Beach. I worried whenever I didn't see him for a day or two.

Despite my buddy's admonitions, I sometimes give money as well.

I expect that a big part of the San Diego homeless issue is that it is *possible* to survive for a long time without shelter in your environment.

We have very few homeless people here, I only see two or three with any regularity, and they are well within the capabilities of the local charities to keep sheltered. Being without shelter in the winter in this climate is a death sentence. On the plus side, shelter is pretty easy to find. Unlike San Diego, there are entire *houses* for rent for less than $500/month, and with any sort of public assistance at all and/or ability to find housemates, it is pretty easy to get under some sort of a roof for less than $100/month. The rents that you quote for San Diego are insane, and I wonder why anyone who has any choice at all would stay there if they didn't have a really good job.

My son just got next year's housing setup for next year up there. There is just 3 of them right now, but they will pickup a fourth. And it will be $1200.

This year's place was a bit cheaper in Hancock, an ancient miner's house probably built in the 1880s. Not a bad place to live for a student.

Obviously the farther you are from the University the cheaper the rent.

And definitely, a death sentence to not haveshelter up there. About as opposite of San Diego as yourself going to get. Parts of Northern Minnesota or North Dakota might be a little more harsh.

You are both right. San Diego has a homeless problem for the same reason that rents are high - our weather is just about perfect all year. Coastal SoCal is like that. So once you get here and you can't earn big money, finding housing is difficult. If you're homeless, it makes no sense to leave because it's so much colder and inhospitable everywhere else.