Racism Is A Luxury

Working at Catholic Charities for the last several months has given me a chance to spend time with homeless and destitute people of many races. Our clientele is fairly evenly divided between blacks, whites, Hispanics and Asians. The people mingle together in a courtyard or in the main room while they wait to be served.

Even during the Zimmerman trial, when our self-styled "elites" were telling us we all needed to have a conversations on race, there was no hint of racism. If you were visiting from another planet and hadn't been told to look for it, you would have guessed that skin color meant absolutely nothing.

A few weeks back, I served a black man. I don't think he was homeless, but he certainly was in a bad way. He got his bags of food and was about to leave when a homeless Hispanic guy came to the counter where we usually have free bread. We were out of the bread and we couldn't serve the Hispanic dude because he had been in too recently*. The black guy took some out of what little he had and gave it to the Hispanic man. It was natural, it was loving and it was beautiful. It was straight out of Mark 12:41-44.


He sat down opposite the treasury and observed how the crowd put money into the treasury. Many rich people put in large sums. A poor widow also came and put in two small coins worth a few cents. Calling his disciples to himself, he said to them, “Amen, I say to you, this poor widow put in more than all the other contributors to the treasury. For they have all contributed from their surplus wealth, but she, from her poverty, has contributed all she had, her whole livelihood.” 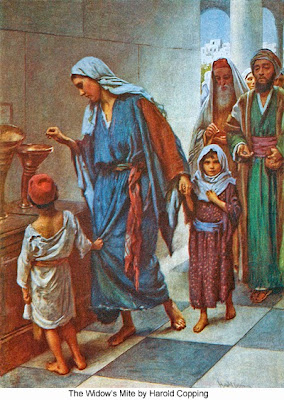 Watching this happen time and time again, with all combinations of races, it makes me think that racism is a luxury. In a practical sense, our customers can't afford to throw away anything, least of all relationships. Making someone else an enemy or missing a chance to make a friend when you're vulnerable is dangerous.

There's a part of me that says there's something more to it than that, though. Something that doesn't relate to the racism in the title of this post. There's an air of love and kindness to the place that penetrates everyone and leads them to share themselves with others. Maybe that's one of the most important things we provide.

Maybe it's even more than that. Maybe we have Help.

"For where two or three are gathered together in my name, there am I in the midst of them.” - Matthew 18:20

* - We simply don't have the resources to serve anyone more than once every two weeks and have set limits on how many times per year you can come in. We're supplemental food assistance and not intended to be your primary source of nourishment.
Posted by K T Cat at 6:30 AM