If Some Is Good, More Isn't Always Better

Yesterday, I revved up the Oklahoma Joe smoker and made a mess of pulled pork for one of my Cursillo groupies whose son* just got out of the hospital after a 31-day stay. The young man lost 17 pounds from an already slender frame while there and needs to be fattened up. His parents put their lives on hold and lived in their son's hospital room to the extent the hospital and the father's job would allow. Now that the ordeal is over, they all need some down-home culinary lovin'. They requested my pulled pork, so I cranked up old Okie Joe, grabbed a pair of pork shoulders and turned on the Google TV so I could watch Europa League games while I cooked.

The end result was beautiful. 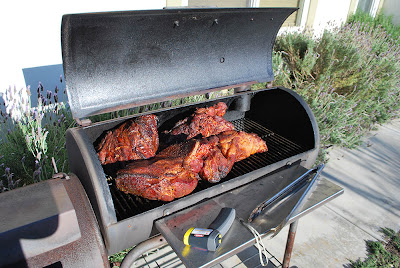 The end result was also way undercooked. After 7 1/2 hours in the smoker, the internal temperature of the pork was 130 instead of the prescribed 190. The recipe calls for 7-8 hours in the smoker and I wanted to be on the short side of that, so I had loaded more coals than usual into the firebox. Instead of running hotter, the smoker ran colder. All day it ran cold, so I kept adding excess charcoal. I didn't figure it out until it was too late.

Fire needs oxygen. A bigger fire needs more oxygen. The smoker works by restricting air flow. Adding more coals increases the heat up to the point where the intake can't support them all.

And thus, I managed to spend a whole day watching soccer.

I spent the whole day watching soccer and then had to put the pork in the oven for an hour and a half to finish it off. The end result was still delicious, but had this been a dinner party, it would have been quite embarrassing.

So, like drinking beer, eating jambalaya and buying Newcastle United shirts, jerseys, hats and sweatshirts, there comes a point of not just diminishing returns, but actual regret**.

* - The lad is a miracle in so many ways - he survived terminal brain stem cancer in second grade, went on to become salutatorian at our Catholic all-boys high school and then graduated from Georgetown with a degree in International Finance. From there, he got a job at a bank and has been a model of fortitude in the face of troubles as he has suffered severe health problems all his life, stemming from the brain cancer.


Look at my blog: health and fitness
My site > ketoneraspberrytips.com

Thanks, Ivyan! I'm thinking cooking delicious noms for others is my ministry.

I'm leaving that spam up there. Raspberry ketones? Awesome. I'll bet they're delicious over ice cream!