In Fascist Societies, Politics Is All That Matters


Politics is NOT my number one priority in life. For the Left, it seems like it may be. There seem to be Statists who view politics as life itself. A lady in the audience mentioned a rich Obama family (around Richmond, maybe) that put up four Obama operatives for a full year leading up to the election. Think of Democrats as political Jehova’s Witnesses.

An oyster farmer in the San Francisco area is losing his lease on Federal land. Dig the machinations. The wilderness fanatics within the National Parks are shutting down the farm, so the owner is working with elected officials to keep it open. It's all political. The key sentence is highlighted by me.


"This isn't about an oyster company, for us," said Neal Desai, the associate director of the National Parks Conservation Association. "This is about taking care of our national parks for future generations and honoring a decades-old agreement to protect our heritage and create a marine wilderness. Letting the lease expire, removing all the motorboats and removing all the non-native oysters is good for the environment."
Powerful supporters

Lunny's request for an extension had powerful supporters, including Feinstein, Marin County Supervisor Steve Kinsey and former Peninsula Rep. Pete McCloskey, who put up a major fight to keep the operation going.

In Pennsylvania, low-wage and even mid-wage workers are chumps. 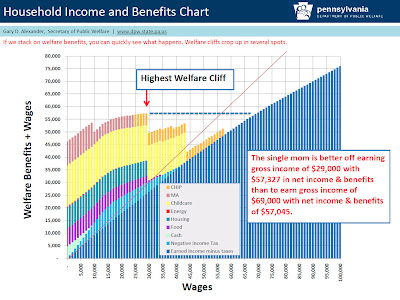 It's all about government management of the population. Working and living outside the government doesn't pay as well as living and working inside of it? That's a feature, not a bug.

As Dean points out, Mussolini is cool again. To quote Il Duce, "Everything within the State, nothing outside the State."
Posted by K T Cat at 6:42 AM

Can't add to this. Right on.

Thanks for the link.

I'll have to read up on the oyster farm. I misplaced a link I found on Instapundit that featured a 20 minute video on the subject.

In short, I fail to see how limited commerce on protected lands are concepts totally exclusive of one another. Last I checked there was commerce occurring in Yosemite Valley. Shut down Curry Village?

Dean, it's part of the effort to recover wilderness lands for the sake of having more wilderness.