A New Year's Wish For The Tea Party

The big PC out in the Catican where my email lives is on the fritz, so I'm doing this from memory. I apologize to Mut if I've got the question a bit muddled.

On with the show.

Mut asked if we had any New Year's wishes or resolutions for the Tea Party. Here's mine. 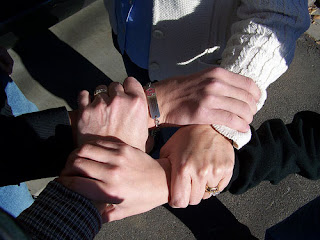 Realize that everything is interconnected. Social mores, political freedom and fiscal sanity are all part of the same whole. As I (badly?) tried to suggest in a previous post, financial libertarians and social conservatives have common cause. I'd like to suggest that they are inseparable. I'd throw in the fiscal hawks as well. Here's how it works, at least in my mind.

In a democracy, traditional mores* are a bulwark against fascism. When morality breaks down and families atomize, the number of people in poverty with few mechanisms for success grows. Politicians have easy pickings convincing these people that their problems are someone else's fault and they deserve "entitlements" paid for by the "rich". Peronist fascism finds fertile ground with the breakdown of traditional morality.

Dittos for political freedom. As political freedom is lost and more power is granted to the State, those in power find less reason to put up with moral heresies. Don't like funding for abortion? Too bad. They have the money and the power and you'll shut up and do as your told. It may be benevolent and well-intentioned, but the temptation to wield the power to enforce a particular vision of society is always there and eventually, someone will give in to it.

Finally, there is fiscal sanity. The Fed isn't printing $1T+ per year and handing it over to President Obama to spend in support of married, $80K-earning families. Without growing centralized authority and reduced political freedom, there'd be fewer expensive, government solutions proposed and enacted. The fiscal crisis has been fed by the breakdown in traditional morality and the loss of political freedom.

If the Tea Party stands for personal freedom and financial responsibility, I'd suggest that it firmly support all three things - traditional morality, political freedom and fiscal sanity. None of them will succeed on their own.

Bonus wish: That we can bring the social justice crowd along for the ride. Fiscal collapse and family breakdown are not conducive to any definition of social justice. Certainly there's common ground here, no?