The president's supporters are at risk of becoming soggy cereal. In fact, I don't see how it can be stopped. Eight months into his presidency, they are screaming "Racist!" at everyone who disagrees with him. Maureen Dowd is the latest.

Once they start down this road, how do they stop? If disagreeing with Obama Care makes you a racist today, will you stop being a racist two years from now when you disagree with, say, taxing the living daylights out of the oil industry? If the premise is that opponents are racists, then the only way for opponents to stop being racists is ... is ... is what?

Hence, soggy cereal. With 3 years, 4 months to go in his first term, Obama's allies have poured the milk into the cereal bowl. It's not coming back out, either. The cries of "Racism!" are going to go on and on and on and on. Just like soggy cereal, the whole things is going to get old pretty fast. 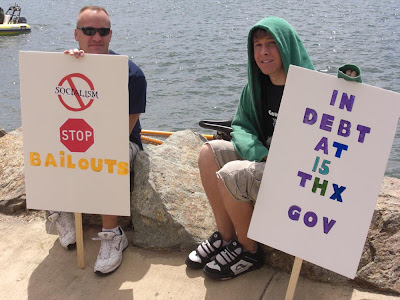 Our Monks of Miscellaneous Musings took this photo at a San Diego Tea Party. These two guys are racists, according to the president's supporters. How long until they get tired of being called racists?
In a previous post, I suggested this follow-on to Godwin's Law:

When you claim your opponents are racists, you've already lost the debate.

That's a rational reaction to the endless cries of "Racism!" - there's an emotional one, too. Americans are going to get really sick of the people who are screaming it and will treat them the way we treat soggy cereal.

I hope you enjoy the garbage can, Maureen. Say "Hi!" to Paul Krugman when you get there.
Posted by K T Cat at 1:15 PM

I actually like soggy cereal, but I enthusiasticaly agree with your point. The left is operating the racism accusation exactly the way my kids treat anything mechanical that starts to malfunction - keep pressing/clicking/pushing harder and harder until it's completely broken.

No actually those two folks aren't acting racist. And practically no one would say they are. But these folks are. Sometimes its not the message, but the messenger. The difference between the two should be obvious to any one with their eyes open!

This post has been linked for the HOT5 Daily 9/14/2009, at The Unreligious Right

OK, Kelly, I saw the photos and other than the Long Legged Mack Daddy (which really looked photoshopped to me - the shading was all wrong on the signs compared to the rest of the photo and the tea party folks rarely have identical signs) and the Confederate flag, I didn't see it.

There were certainly no speeches equivalent to ones pretty standard for folks like Van Jones. You're taking individuals out of a crowd of 120,000 and claiming racism for the whole. On the other hand, Van Jones and Professor Gates and Rev. Wright aren't just individuals picked out of a crowd, but are actually leaders of groups.

If those couple of signs are the best you can do, then starting the cries of "Racism!" with 3 years and 4 months to go is only going to backfire.

That is from a Pastor Manning, who is a blistering critic of Obama, and has gotten a fair amount of airplay on conservative radio. His videos/sermons are on Youtube if you would like to check it out.

Pastor Manning happens to be black, so I guess he is racist too!

Of course, given the Acorn videos that have dribbled out over the last week, and Obama's close ties to that organization, perhaps he was actually on to something.

Thanks, Stirner. So they can't even find racism when they handpick the signs they choose to highlight?