Recently, the State of California discovered that the money it thought it had in it's other pair of pants had been stolen by George Bush and spent. At least they think it was George Bush. Lord knows he's responsible for everything else that's going wrong. Now they're faced with a $2B $6B $12B $14B deficit and they need to cut spending. Where are they going to cut? Why education, of course.

The Governor’s proposed 2008-2009 budget contains disastrous cuts to education and children’s program*...The proposed budget would make across-the-board cuts to education, health care and other programs that have a direct impact on the safety and well being of California’s children. 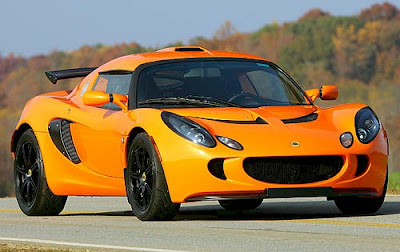 After buying a Lotus Exige for each classroom, there's only $226,000 left.
Won't anyone think of the children?

* - Where the heck else are they going to cut other than the social programs? It's a state, for cryin' out loud. Social programs are the only things they spend money on, other than basic services. Maybe the Teachers Union thinks California is building it's own aircraft carrier or something.
Posted by K T Cat at 10:14 AM

There's so many obvious sarcastic comments to be made about the teacher's union...so little time and space to put them all in a comments section. Think I'll link this one into my next wizbang post this weekend.
In the meantime, perhaps they should buy 3 Exiges! leaving $26k for books etc per classroom...works for me!