Uncle Jack and the Gulls

Last week, while I was on travel back east, I had a chance to go visit my Uncle Jack who lives along the New Jersey shoreline. He's an accomplished fellow and my father's best friend. In his retirement, he's taken up birdwatching. I hadn't seen him in years, so when my schedule opened up, I gave him a call and drove up to watch birds with him. It had to be one of the best things I've ever done.

For one thing, Uncle Jack was a treat to be with. I know it's a cliche, but like most people his age, he's full of fascinating stories and salty wisdom. The time went fast while we were together as he talked about the things he was doing now and stories from when he and my father were together in school and in the service. His interest in bird watching rubbed off on me, too.

We stopped and saw an osprey on her nest and I took a few pictures, but they didn't come out very well. We walked across a marsh and watched a variety of wetlands birds hunt for fish and crustaceans. Then we hiked up a small dune out in the middle of the marsh and sat with the seagulls.

This time of year, the gulls were sitting on their nests, waiting for their eggs to hatch. When we walked close to them, they flew off a short distance and chided us for bothering them. The eggs looked like this. 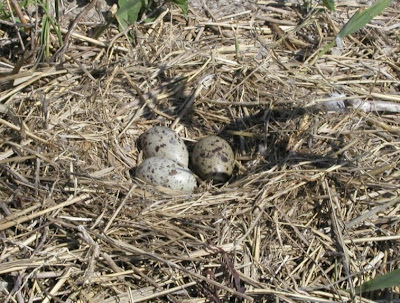 After we had sat for a while, the gulls calmed down and returned to their nests. I calculated that the dune had somewhere around 200 seagull nests on it. Here's one of the gulls. 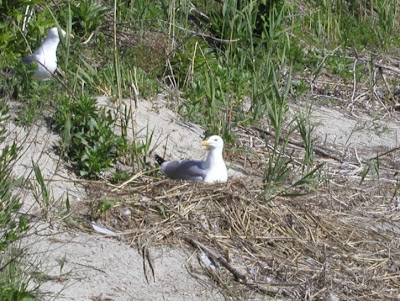 For the gulls on their nests, time proceeds at a stately pace. Once all of us settled in, we just sat together, the two of us and about 80 or so gulls within sight and another 300 or so gulls over the ridges of the dune. The gulls became quiet and still. There was no sense of urgency, only a sense of connection with the past, a sense that time was flowing slowly by. The gulls were doing what gulls had done for millennia, sitting placidly, waiting for the next generation of gulls to emerge.

Living in San Diego, I see seagulls all the time. When I see them at the beach or around the harbor, they're noisy and active. Sitting peacefully with them for an hour was a completely different experience. You can't help but think about the contrasting episodes of your own life as you sit with quiet gulls.

This week's Friday Ark has more bird-related posts. I and the Bird has a really big list of avian posts.
Posted by K T Cat at 5:02 AM