This Can't Go On!

Watching the online replay of Tucker's show yesterday, I saw Brit Hume and Tucker express their amazement at the way the press has completely ignored Joe Biden's obvious and massive corruption. Just that day, Tony Bobulinski, a business partner of Hunter and a registered Democrat with a history of donating only to Democrats, came out with hard evidence that Joe Biden was on the take from the Chinese to the tune of 6 or 7 figures, while he was VP. It was as smoking a gun as could smoke.

The news media ignored it. Here was NPR's take. 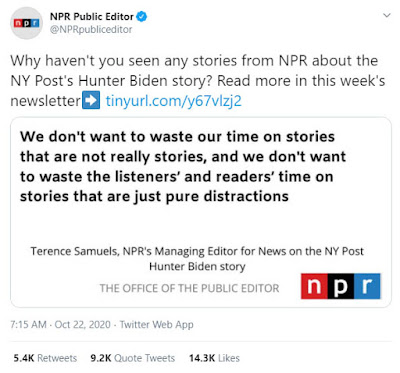 Tucker and Brit harrumphed and said, "This can't go on!"

In Minneapolis, a group of business owners facing intolerable increases in crime following the retreat of the police force from Neighborhoods of Color, demanded to know what the cops were going to do about it. The reply was had the honesty that comes from total despair.

"As far as a long-term plan I don’t have one. I have lost 30% of my street officers since the end of May. Budget cuts from COVID-19 and an additional 1.5 million from the council in August we have let go 17 CSO’s and cancelled a recruit class of 29. A potential Cadet class slated for January of 2021 was also eliminated. It takes about a year to get a police Officer onto the streets with hiring, backgrounds and field training so reinforcements aren’t coming anytime soon."

That article quoted someone or other as saying, "This can't go on!"

Oh, yes it can and yes, it will. It's happening right now and there's no indication it's going to turn around.

Going back to the Bidens, it's no longer worthwhile to wonder what happened to the honesty and professionalism of the news media. Brit kept saying things like, "A professional journalist would see this and do such and such!" Brit, that it's not happening should tell you something. There are no professional journalists any more. Waiting for them to show up and rescue you is delusional. The cavalry is not coming over the hill because there is no cavalry.

Now that I have this mental model, I bet I'll see this a lot more. It's people in their 40s and older, thinking that this is still America from the 1980s or so, where the culture still had some momentum from the Greatest Generation. That momentum is just about gone. What you see when the Participation Trophy Generation children at NPR refuse to cover the Bidens is reality. Your memories are not reality.

Our job, then, is to teach those values, not wish for them to show up again.

"Participation trophy" generation-- since they were starting those things when my (Boomer) mom was in school, good description.

The folks who didn't reject the philosophy, rather than everybody of an age.