Putting Your Robin DiAngelo Books In A Moving Van

This week, Philadelphia joined the list of cities where people have rioted and looted because police attempted to maintain the law and order necessary for civilization. A dude with a massive rap sheet and a history of violence against just about everyone, rushed at some cops, waving a knife. They drew their guns, told him to drop the weapon and then shot him when he didn't.
In a city run by Normals, that would be a page-three story. A violent criminal was shot resisting arrest. In deep blue Philly, it was a cause for racial justice of the kind Robin DiAngelo blathers about, particularly in her book, White Fragility.
Even if you're a a fully anti-racist fan of White Fragility, chances are still good that you're also a fan of working, shopping and driving your car without it being stopped and smashed to bits by protesters. If you lived in Philly and saw things like the video below, you might start thinking about not living in Philly.

Wife kitteh and I had a conversation about this over the weekend. If we lived in LA instead of SD, we'd be putting our house on the market and moving, quite possibly out of state.

Perhaps this is a bigger deal than even the election. Just with my admittedly myopic view, it sure looks like we're at the start of some major regional realignments. Productive people are going to get out of the blue cities and make their ways to safer climes. They may pack their Robin DiAngelo books in a box and bring them along, still completely committed to the discovery and eradication of racist leprechauns, but that doesn't mean they'll go down with their current cities.

As another data point, SF looks like it's in full implosion mode. 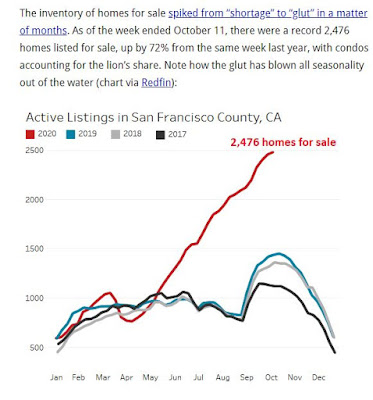 That plot is mildly terrifying. If that kind of slope lasts much longer we will be looking at plummeting prices and soon the city will end up with few actually productive people. The economic costs to the rest of the state could be truly awful. Not to mention the impact on the places all those folks go with their CA liberalism (i.e., crazy kooky Kafkaesque liberalism).

From the folks I've spoken to who fled San Fran in the last few years-- the policies put in place have forced out most of the productive people. This is getting the last dregs, and running off the folks who have enough income to live without having to produce in the area.