We recently began a major, new corporate initiative. I think. The only way I found out about it was someone at the worker level mentioned it on our social networking app, asking if anyone knew more than the name and a simple blurb she saw in the newspaper.

She was immediately told by a representative of leadership that she needed to take the conversation offline, onto private email.

How in the world does anyone expect to lead if they won't communicate? I'm convinced that 90% of all leadership positions are occupied by people who just want the title and the cash. They have not a speck of interest in actual leadership, they're just climbers. 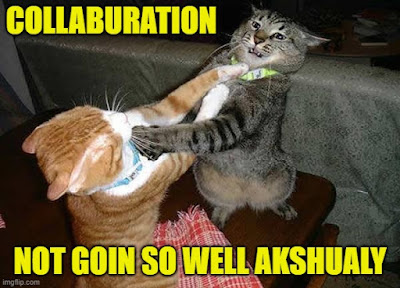 Once upon a time, back when I was working, there was a major initiative being discussed. Once it started to be rolled out a senior manager (not leader) mentioned to me that they’d tried to keep it a secret, but that “everybody seems to know already”. I pointed out that in an engineering/science organization a lot of the people were hired essentially because they were smart. So why did they think they could fool them all? Eventually he admitted that “when you put it that way, it does make us look stupid, doesn’t it?” But it didn’t make them change.

=="I'm convinced that 90% of all leadership positions are occupied by people who just want the title and the cash. They have not a speck of interest in actual leadership, they're just climbers."==

I started to figure out when in grade school that most of the people in positions of authority don't belong there, can't do the jobs, and mostly don't even try. What they strive for is the *appearance* of calm-and-controlled situations.

This is *why*, for instance, "the authorities" generally come down much harder on peaceful and law-abiding than on the violent and law-breaking.