Jerry Brown Will Be The High Water Mark Of American Progressives

... because there's nowhere to go but down from here. Dig this.

At that link, Monty Pelerin gives the gory details on all of our unfunded social program obligations. I'm not going to recapitulate them here, but suffice it to say that the mathematics of giving what the social progressives have already promised don't work out. Not even a tiny bit.

Our social safety net is going to fall apart no matter what. There will be no more promises, no more programs, no more guilt-induced voting for new benefits. It's all over. The tipping point was the Fed printing $600B to keep the checks coming. That aftershocks from that have yet to be felt as foreign governments decide what to do about the Dollar. In any case, all of the progressives' plans for government investments are over and done with in terms of actually being applied.

Two years from now, no matter what the new Congress does, our government will be spending less. They'll have to, because their debt servicing costs will be higher and programs like Social Security will be selling Treasuries rather than buying them.

It was a nice run while it lasted, but it's over now. Jerry Brown's California is going to be the show to watch as the government contraction unfolds. He's going to be the last of his kind - the big-government progressive who actually wins a meaningful office. 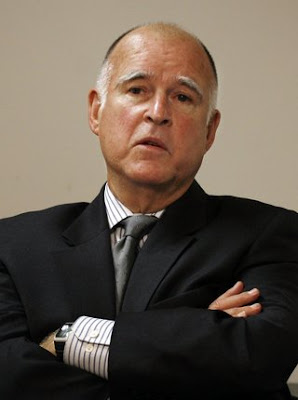 Jerry Brown's California is going to be the show to watch

I feel sorry for people like you, who have the bit parts.

Gee wasn't it a Republican governor who was in charge of things for the last 7 years! Hasn't worked out so well after all. I remember Jerry Brown the last time he was governor. He governed with a surplus.

Jerry Brown governed with a surplus built by his predecessor, Ronald Reagan. Reagan had turned around a $194 million deficit and left Jerry with a $550 million surplus. Brown left his successor, George Deukmejian, with a huge deficit.

What does the market know about California's finances that the rest of us don't?