On the Eucharist and Equaltiy

Following the example of my wife, I recently became a Eucharistic Minister. There's not much to it, you just help distribute the Body of Christ or Blood of Christ at Mass. It shouldn't have been a big deal at all.

I've always been a rational Catholic. I've never been comfortable with mystics or prayerful "conversations" with God. My faith has been on the cynical side. "Body of Christ" the priest would say as he offered me the Eucharist. Many times my thoughts would be along the lines of "Yeah, yeah, whatever, let's keep the line moving, Mac" as I said "Amen." My wife has inspired me to a deeper involvement with my faith and that led me to becoming a Eucharistic Minister. The training was minor, about 2 hours in one evening and the commitment is negligible - show up at your regular Mass and help out.

The effects of doing so have been life-changing. 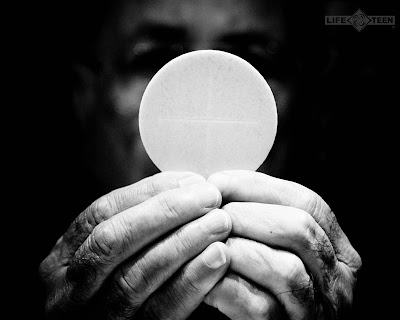 I just hand it out. What's the big deal here?
I've only done it 4 times now, but each time I do it, I get choked up. The biggest epiphany so far has been one of human equality. I mean total human equality. As I hand out the Body of Christ, I see old and young, fat and thin, rich and poor, black, white, Latino, Phillipino and for all I know, Eskimos. Some look upon the Eucharist with love, some with hope, some with doubt of their own worthiness and some with the cynicism that used to be me. Some are happy, some have lives filled with tragedy and others are burdened by deep sins they struggle with every day. All of them are seeking Christ.

Christ sees no distinctions, only human beings, human souls. All are equal as they receive the Eucharist, equal in the deepest, most profound way possible. In each of the few times I've done it, I've had to hold back tears as I realize what I'm doing, how I am serving as a tiny link connecting them with God and how very much most of them want it.

It's changing me in my daily life, albeit slowly. I've started seeing people around me as those who come up to receive the Eucharist. I hope it's bringing me a compassion for others, a compassion I have so often lacked. My wife calls it "Grace." I don't know about such things, but I believe her. We have very different versions of faith, she and I.

As I read this and edit it, I can see I'm struggling with what I'm trying to say. That's natural, I suppose, as I'm trying to convey a feeling, an understanding, an existential truth. We're all beloved souls and all equal before God. If He thinks we're equal, who are we to argue?
Posted by K T Cat at 12:04 PM

I have had some of the same feelings--I believe what did it for me was when I looked into their eyes, faces as I offered them the Host--the range of emotions was so amazing, and I have often been brought to tears as well. I believe I have been given just a tiny glimpse into their inner being, soul if you will.
The looks I receive vary as much as the people; trust, wariness, hope, happiness, peace, and yes, occasionally, boredom or nonchalance--not sure--but I don't seem to be able to do it w/o feeling. I also lector, or read the Word, and I sometimes come very close to losing it--wow! It has changed me.

Mari, thanks so much for that comment. That means a lot to me.