We lowkey got scammed pic.twitter.com/ywLDDjCysj

I thought it was brilliant. If you follow Brittany, you know that she doesn't want to remove women's choices, she just wants the choices to be well-informed. The idea that there are no tradeoffs and that feminism led to increased happiness isn't true. It led to different happiness and different regrets.

It's young women who pay the price for making uninformed decisions. Those years from 20-40 are where these issues hit the hardest. Before 20, you've got mom and hopefully dad. After 40, there are rarely any more rugrats coming. Between 20 and 40, there are serious tradeoffs to be made.

The replies have been telling. The negative ones all claim that women used to be oppressed and life was pretty bad in the old days. They don't answer any of the points in the video.

One Muslim supported Brittany and left this as a reply. 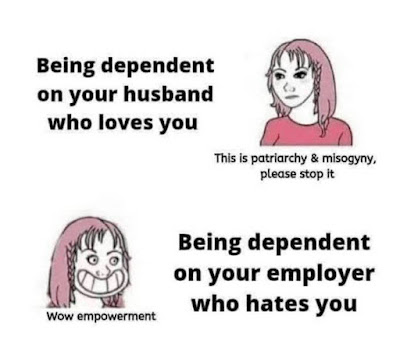 I don't spend time perusing Muslim Twitter feeds, but if this is their argument for traditional sex roles, it's a pretty strong one. Where I work, most people spend their days in inhuman, open cubes. You can hear all of their personal phone conversations. There is plenty of family drama in everyone's life and you can't help but think how much less there would be with a traditional family.

Some of the objections to the video pointed out how widows were screwed in the old days. If their husband bought the farm and they had no employment opportunities, abject poverty would be their fate. That's spot on, but that risk is part of the very real tradeoff that is being made.

Open cubes aren’t as bad as the full height ones. In those people think they have privacy and say all the weird things….

Both my grandmothers were widowed ... more than once. Somehow, they didn't just die. And, were it not for coddling her drunkard son, my maternal grandmother could have been fairly well off.