Greece's Future In One Chart

Greek GDP is way off its peak and isn't going anywhere. 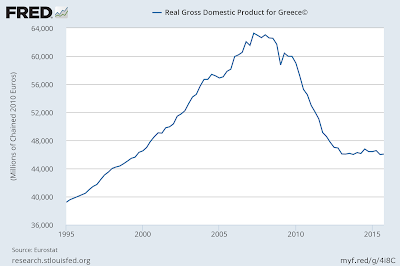 Meanwhile, they're borrowing money to make the payments on their debts. To say that they're going to grow their way out of this is an act of pure optimism. There's no indication of growth at all. In fact, given their location on the Islamic invasion route, it's a good bet that Greek GDP is going to start going down.

I have a blog post in mind about the progressive, post-modern, secular world and debt as a sequel to the one about their attitude towards children, but I've been struggling with the data. Perhaps this data says it all. Europe is as progressive, post-modern and secularist as it gets. If this is indicative of anything, it's that the Euros see debt as a way to hide from reality.
Posted by K T Cat at 2:53 AM

"Europe is as progressive, post-modern and secularist as it gets."

Not quite. We're unfortunately slithering ahead of them:
https://www.prageru.com/courses/political-science/whos-more-pro-choice-europe-or-america