Newsflash: Obama is a Rookie

Scales continue to fall from eyes. First off, there's the conservative Bill Kristol.

What accounts for this debacle? You could start with a lack of presidential leadership. Who would have thought the missing player in the first month of the administration would be Barack Obama? He let his signature economic legislation, the stimulus, be shaped by congressional Democrats. He let internal disputes over the difficult question of how to save the banking system result in a disastrous non-announcement of a non-plan by Treasury Secretary Timothy Geithner last week. Before that, he let Geithner become Treasury secretary after cheating on his income taxes, and waived his own ethics rules to appoint a lobbyist as deputy secretary of defense--undercutting his promises to clean up Washington. He allowed Rahm Emanuel to politicize the Census Bureau, losing as a result his commerce secretary-designee, Judd Gregg, an ornament of his professed hope for bipartisanship.

In foreign policy, Obama has exerted no more control. He allowed both Super-Special Pooh-bah Richard Holbrooke and National Security Adviser Jim Jones to give interviews to the New York Times and the Washington Post, respectively, touting their own importance and presenting the president as a distant player in the formulation of foreign policy. Meanwhile, turf wars in the State Department and the National Security Council are even more bitterly fought than usual. The tale of Holbrooke shouting at Undersecretary of State Bill Burns that he'll keep Burns waiting as long as he wants, since he (allegedly) outranks Burns, makes the Rumsfeld-Powell drama look tame.

Next comes the entire Obama Administration.

The giant stimulus package that cleared Congress Friday includes a last-minute addition that restricts bonuses for top earners at firms receiving federal cash -- including those that already received it -- more severely than the Obama administration's previous pay limits ...

As word spread Friday about the new and retroactive limit -- inserted by Democratic Sen. Christopher Dodd of Connecticut -- so did consternation on Wall Street and in the Obama administration, which opposed it.

Emphasis mine. Is that a great quote, or what? The Obama Administration is so totally out of touch with what's going on in the Stimuloid Porkgasm™ that they were surprised to find out that Dodd had decided to enact wage controls. Next, comes Bush-hater Yves Smith.

So consider the fact set. Geithner is clearly over his head and overloaded. He announced a multiifacted plan to rescue the banks, and it will take a full-bore effort over the upcoming weeks and months to sort that out. And Reuters indicates that Geithner is Obama's "designee" on the auto program.

The last thing you want to do is overload someone who is already in danger of muffing a crucial project. But here we go, Geithner and Summers now have more to do, and the auto industry bailout is coming to a head shortly. This was already set to be handled by a "car czar". The car czar has instead been supplanted by a car committee ... And having the overloaded Geithner and bull in the china shop Summers as leaders means that other participants, most importantly those who know something about the industry, are likely to be marginalized.

Consider the track record: this duo sidelined Paul Volcker, who brings enormous experience, a first class reputation, and a willingness to question orthodoxy ... And we see this again in the auto bailout, where the dastardly duo has persuaded Obama to set up a structure that assures them control over the answer, even though they have no knowledge of the industry.

Gee, Yves, it's almost like we elected a rookie or something.

Oh well. At least there's something we know Obama will do well. 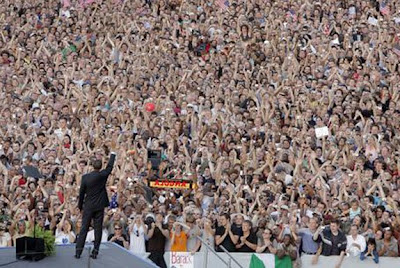