I never thought the blame given to President Bush after Katrina was very fair. It was a colossal natural disaster and humans being human, some agencies made mistakes in the immediate aftermath. Similarly, I've thought that the criticism of Obama over the Gulf oil spill was a lot of political opportunism and totally unfair. That's what I felt two weeks ago.

5 days is a lot less time to react with coherence and sophistication than 40. In 40 days you can do an awful lot and a competent organization ought to do it with purpose and planning. The Obama Administration has neither of those things and yesterday's press conference showed it. Peggy Noonan, Our Holy Ambassador to the Court of the Mainstream Media, has an outstanding piece today with this tidbit.

The original sin in my view is that as soon as the oil rig accident happened the president tried to maintain distance between the gusher and his presidency. He wanted people to associate the disaster with BP and not him. When your most creative thoughts in the middle of a disaster revolve around protecting your position, you are summoning trouble. When you try to dodge ownership of a problem, when you try to hide from responsibility, life will give you ownership and responsibility the hard way. In any case, the strategy was always a little mad. Americans would never think an international petroleum company based in London would worry as much about American shores and wildlife as, say, Americans would.

Belgium can work this way. Belgium is small enough so that their leaders can claim that mighty outside forces are at work and tiny Belgium is impotent to stop them. The US cannot work that way and having a president who won't or can't take charge of situations is fatal to his presidency, which is Peggy's point.

Over at our Monastery of Miscellaneous Musings, Dean had the same initial reaction that we did and is coming to a similar conclusion.

Because of the fact that most criticism of this nature tends to be cheap political grandstanding, we are no more apt to blame the Katrina aftermath on Bush than we are to blame Obama for the Gulf/BP oil spill response.

Which is exactly what you'd expect from someone with no executive experience. 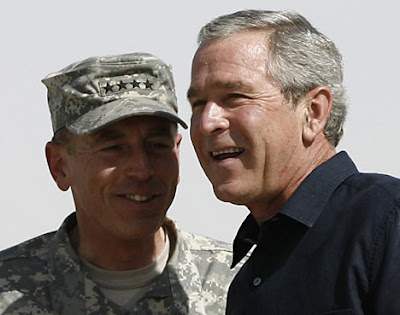 Say what you will about him, but President Bush came to office with plenty of executive leadership experience and never flinched from taking charge of a situation.
Update: Dean links to this Karl Rove piece with this bit in it.

On May 8, Louisiana sent a letter to BP and the EPA begging BP not to use dispersants below the surface of the water. Subsurface use of dispersants keeps oil slicks from forming. But when it doesn't come to the surface to evaporate, the oil lingers below, gets into underwater currents, and puts at risk fisheries that supply a third of America's seafood.

On May 13, EPA overruled the state and permitted BP to use dispersants 4,000 feet below the surface. Then, a week after BP released 55,000 gallons of dispersants below the surface, EPA did an about-face, ordering BP to stop using the dispersant and to "find a less-toxic" one. Louisiana officials found out about this imprecise guidance in the Washington Post. BP refused, EPA backed off, and Louisiana's concerns about their marine fisheries remain.

This is what inexperience and incompetence look like.
Posted by K T Cat at 12:53 PM

At least Bush and the gang in Washington appeared to be TRYING to do something other than covering their butts. The distinct impression I get from this administration is all they have done (other than distance themselves of course) is to tell BP to "Fix the Leak."

Obama deserves every bit of the flack he is getting now. Especially since he now knows what it is like to be stuck in a no win situation and have someone beat you over the head with it.

KT, thanks for the link.

The more information comes out, the worse things look for Team O.

This is horribly depressing.

I'm still steamed over the hit job on Bush over Katrina. So much misinformation and outright lying. It's why I'm cutting Obama a lot of slack here. There are a lot of good reasons to think Obama is a poor president. I don't think this is one of them.