A while back I posted a suggestion that the Yen was going to be in big trouble because the Japanese government had run up a positively monstrous debt, about three times the size of ours. Ambrose Evans-Pritchard has an article today going in the same direction. Israel's Financial Expert piles on.

Japan owns almost as much US debt as China. China has $799B and Japan has $747B. The UK is a distant third at $230B. Before I go any farther, let's run a couple of excerpts from the posts linked above. First, Ambrose:

2010 will prove to be the year that Japan flips from deflation to something very different: the beginnings of debt monetization by a terrified central bank that will ultimately spin out of control, perhaps crossing into hyperinflation by the middle of the decade ...

Japan’s deficits are already within the hyperinflation “red flag” zone identified by historian Peter Bernholz (”Monetary Regimes and Inflation” .. the Bible on this subject).

And a little more doom and gloom from an earlier column of his.

The shocker will be Japan, our Weimar-in-waiting. This is the year when Tokyo finds it can no longer borrow at 1pc from a captive bond market, and when it must foot the bill for all those fiscal packages that seemed such a good idea at the time. Every auction of JGBs will be a news event as the public debt punches above 225pc of GDP. Finance Minister Hirohisa Fujii will become as familiar as a rock star.

Once the dam breaks, debt service costs will tear the budget to pieces. The Bank of Japan will pull the emergency lever on QE. The country will flip from deflation to incipient hyperinflation. The yen will fall out of bed, outdoing China's yuan in the beggar-thy-neighbour race to the bottom.

By the way, the Weimar hyperinflation was triggered by currency speculation, but that's another story. From Israel's Financial Expert, we get this prediction for the upcoming decade, written in the style of a person from the future looking back on the decade:

10. Japan's Government Bond Market Implodes- The Japanese government and economy got used to record low interest rate. But the combination of government debt reaching 230% of GDP and the ageing population cashing in via the pension funds on the government bonds cause a total implosion. In only 2 month the yield on 30 year government bond went up to 4% causing a panic selling and forcing the government to finally cut the deficit. The deficit cut where not enough, and Bank of Japan did what it knew best- printed money. Only this time, to there big surprise it resulted in inflation, and just ordinary inflation-hyperinflation. The markets discovered that they where worried about the wrong country. Japan became the first modern country in 21st century move towards hyperinflation

OK, so everyone is sufficiently lathered up about Japan's adoption of every screwball idea Paul Krugman has ever suggested. I quite agree, up to a point.

When the Japanese start struggling to service their loans, they may well begin to print money to the point where inflation kicks in. Hyperinflation doesn't just pop into existence overnight, it gradually comes upon you. As the Japanese see this storm coming, they're not going to just sit there and let it break upon them, they're going to cash in whatever they've got on hand in order to stop the slide. With about $750B of Treasuries handy, those things are going to get jettisoned long before hyperinflation hits Japan.

The real excitement won't be in Japan, it will be in the US. Imagine California on a larger scale with no Federal government to bail it out with Keynesian stimuli porktaculars. As a personal analogy, when the bank that holds your mortgage gets in trouble, it calls that mortgage due and then you've got to come up with the cash to pay them right away. The Japanese hold a big portion of our mortgage and they're sailing right into a typhoon*.

This is not a cause to panic, but a cause to prepare. The Dave Ramsey days are coming for the US where we'll have to live on rice and beans while we pay down our debts. It can be done by individuals and it can be done by nations as well. If Scott Brown wins the Senate seat in Massachussets, it will be a good sign that Americans comprehend what's going to be required to escape what an economically illiterate Obama is trying to do to the nation. 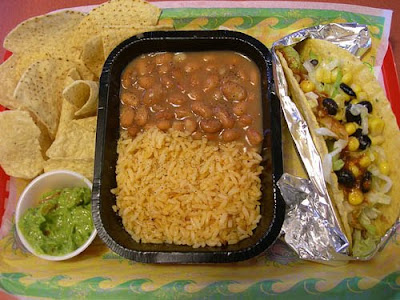 Rice and beans. Yum!
* - Does this post win for the worst mixed metaphor of the week?
Posted by K T Cat at 5:51 AM

"By the way, the Weimar hyperinflation was triggered by currency speculation, but that's another story."

The better case is that their hyperinflation was brought on intentionally by the central bank as a way to dodge their Versailles reparations.

Hope you are doing well:)

I am Sarena, I just checked your blog, and I found it very informative and coherent. It would be great if we become friends and help each other, because we are in the same fields.

I manages few sites and blogs on finance, It would be great if we increase our back links to get long term benefits and mileage. I can provide you some great quality content as well.

If you would like to be my friend then please check out this comment and revert back to me at here : sarenajones1985 @ gmail. com

let's do something great for our sites.:)