The Answer to Yesterday's Quiz Question

... can be found in this chart of the Federal budgets in 1945 and our near future. 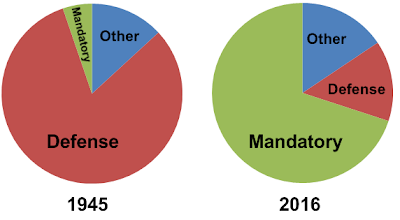 To refresh, the question was this:

Some economists have suggested that our current deficit and debt is no big deal because we've been here before and gotten out of it. For example, our relative debt burden in 1945 was greater than it is today and yet we managed to pay it off.

What is the flaw in that comparison?

The answer lies in the source of the deficit spending. In 1945, we spent like crazy to defeat Nazi Germany and Imperial Japan. Once we won the war, we could stop buying all those Sherman tanks and use that money to pay off the debt we had incurred during the war. No one was jumping up and down screaming that we needed to keep buying Liberty ships for the sake of the poor or that cutting the strategic bomber budget was racist.

In short, the cash flow we had used to win the war was now available for debt reduction.

Until our culture embraces the concept of earning what we get, we're doomed to continually reap these deficits.

The graphic came from this post over at Political Math which has a much better take on this concept.
Posted by K T Cat at 1:11 PM