Maybe that's what the blue city riots are. I just watched video of rioters in Washington, DC screaming in someone's face. It was interminable and filled with cursing, so I won't post it here. I'm sure you can imagine it quite well.

I've posited that this is a Democrat civil war, but today, for the first time, I'm beginning to wonder. What if instead, it's a purification rite? By now, it's not like the Democrats running DC and Chicago and New York can't see what's happening in Minneapolis which is only a month ahead of them in an evolutionary sense.

What if this is a feature and not a bug?

By that, I mean that by now, the Democrats running these cities know full well that the middle class are starting to leave. These are the impure ones, the racists, the religious fanatics, the deplorables. They are full of hate. Irredeemable as they are, until the Democrats can force them into re-education camps, the only way to achieve a city based on love is to get rid of people who hate.

This explanation assumes that the Democrats have no idea from whence their tax money comes. That's the part for me that is inconceivable. I mean, I can see that some of the fanatical progressives think it comes from the Money Fairy, but there's got to be a significant portion of the professional political class in the Democratic Party the can see where this is headed.

And that, thinking out loud as I type, leads me back to the original assertion. This is a Democrat civil war. 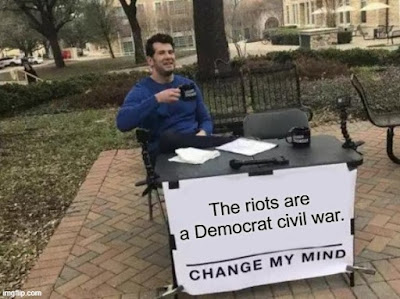 Good points. It's a war on the middle class, trying to destroy them. It's actually part of Marxism's war on capitalism. Most real advances come through the middle class, not from the wealthiest or the poorest. Upward mobility has always been part of American society. That's one reason communism has not caught on here. As C. S. Lewis's Screwtape said, confiscatory taxes are meant to dismantle the middle class.

I've heard that elsewhere, but it just doesn't feel right to me. Maybe I'm to insulated myself and I don't have a sense of how far crazy the left has gone.

I don't think (most) of them are trying to do that-- I think it's just the result.

I think it's just folks sawing off the limb they're setting on, not realizing that's what they're doing. That the folks saying no, stop, don't-- aren't being anti-sawing killjoys, they are trying to save what they've built up.