What If Secession Is The Point?

NEW: Our drone video of the massive single group of migrants that just crossed illegally into Eagle Pass, TX.
Border Patrol agents told us there were up to 500 in this group, predominantly from Venezuela & Cuba. Many were smiling/waving to us & flashing thumbs up. @FoxNews pic.twitter.com/tXBhqhkE4G

I'm a little slow, so it's just dawning on me now that the point of the open border is to either turn the red states purple through demographic change or anger them into secession. I can't think of anything else that makes sense. 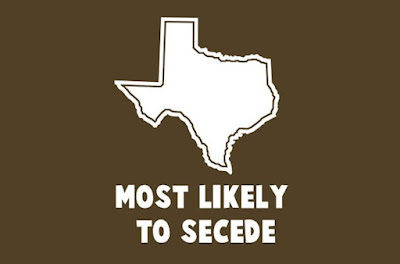 I realize that in a previous post, I said that not making sense is a hallmark of the modern progressive, but I can't let logic go. Rational thought runs deep in us theoretical mathematicians.

Also, I thought I had said it somewhere on this blog, but I can't find it easily so here it is, possibly again: If Texas secedes, every single red state needs to immediately join it. Without Texas, you'd end up as a vassal state to California and New York.

I already said this here.

Just think, they already view the people of Alabama, Mississippi, Louisiana, Texas and Oklahoma as sub-literate, racist trash. In the words of the Journolist crowd, they're "NASCAR retards." If those states were forced, err, allowed to secede, the left would never lose another presidential election, would never lose control of the Senate or Congress and would soon have an unimpeachable majority on the Supreme Court.

In another post, I said that it's not secession if you're not part of a country.

If a state wanted to secede, from what would it be seceding? Would you say, "Texas, you may not secede. You must stay and have your land overrun by non-citizens. You must obey laws that people all around you do not obey. You must use a currency that is being generated out of thin air. You must communicate to us in English. You must send us two senators and n congresscritters to represent you in an near-powerless legislature. Finally, you must accede to the wishes of our judiciary, whatever those wishes happen to be at the moment."

It seems to me that the US, as presently composed, is not nearly as solid and well-defined of a thing as one might think.

It's not a crisis if it's intentional.

The thing that gets glossed over in this secession talk, is the question of who is going to be in charge of Texas after it secedes? And what form of government is it going to be? Are they really going to be a free society with an elected government, and protections for the rights of the populace? Or is the current governor (or his handler) planning to seize power as a dictator, as is more traditional in this sort of situation?

I think that the people screaming for secession do not actually have the best interests of Texas at heart. I think they are wannabe totalitarians who think they are the ones who are going to come out on top.

Why would they be totalitarians? If you listen to what people say, they'll tell you what they think. As far as I can tell they want:

1. A controlled border
2. To be mostly left alone by the government

But look at what you wrote:

- Prime motivation for seceding is that the immigrants will make it "impossible for Republicans to win elections". Which means that it is about retaining power more than anything else.

- Main benefit of seceding would be that it would prevent Democrats from winning elections, which means that it becomes a one-party state. This has always been a key first step in creating a dictatorship.

- Secession has an extremely high probability of kicking off Civil War II, leading to hundreds of thousands, if not millions, of deaths, approximately half of which would be their own people. And yet, they see this as preferable to losing their political power. Which means that they are placing staying in power way, way ahead of the welfare of their own citizens.

Look, it doesn't have to be all of the Texas republicans that want to have a dictator, it just needs to be a small group with a megalomanaiacal leader. In the inevitable disarray after a secession (even without a war), all they have to do is wait for an opportunity to kick aside the not-yet-functional government, and seize power. And if there is a war, it's all the easier. That's how dictators work. That's what they do. It has happened over and over and over again, and they'll be as happy to do it in Texas as anywhere else.

Whether by secession or by some other means, the point is to destroy the USA as it has historically been.