I Don't Understand The Ginsburg Threats

With apologies to Charles Dickens:

RBG was dead, to begin with. There is no doubt whatever about that. The register of his burial was signed by the clergyman, the clerk, the undertaker, and the chief mourner. Kamala Harris signed it. And Kamala's name was good upon 'Change for anything he chose to put his hand to. RBG was as dead as a doornail.

Well, things are heating up, aren't they?

Actually, they're already a bit hot in blue cities, what with the ongoing Democrat civil war and all that. Still, there's a promise of an increase in temperature. 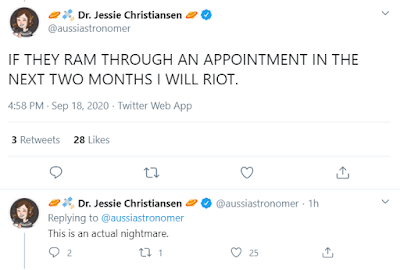 I have no idea who this particular blue-check celebrity is. I chose her tweets at random, illustrative of an avalanche of them I've seen so far.

Haven't we seen the rioting already? Isn't it confined to blue cities? If Democrat constituencies want to burn Democrat cities to force everyone else to give Democrats more power, then by all means, have at it. It's like Mafia goons beating themselves to force the rest of us to pay protection money.

Almost nothing is at stake.

If the unthinkable happens and the Trumpster pushes another originalist justice through onto the Supreme Court resulting in the overturning of Roe v. Wade, the only thing that happens is that abortion law goes back to the states. That means we all get to vote on laws in our communities instead of having five robed Ivy League wonks tell us what we can and cannot do.

Right? Also, how about Biden in 2016, saying that nominating a Supreme Court justice right before the election was the right thing to do?

This just reinforces my belief that government needs to be as small as possible. I don't expect politicians to be consistent or ethical. I'm fine with them being greasy weasels so long as the damage they can do is very limited.

Yeah, I'd like to see Roe vs. Wade taken off the table, too. This whole business of arguing about abortion at a national level has been a mess. It is being used to get people to align with parties that they otherwise wouldn't want to have anything to do with, and as a result the parties are getting support for all of their idiot ideas that would otherwise never make it off the ground.

That said, I am not entirely sure that, even given what looks like the opportunity, the Republicans have any intention of actually reversing RvW. They know what would happen to them afterwards: the conservative christian community would largely celebrate briefly, say, "well, that's done!" and wander off to get on with other things that have no relationship to supporting Republicans. I saw exactly that happen here about 20 years ago when the local conservative christians chased out an exploratory Planned Parenthood office, and I am sure that the national party is horrified at such a thing happening nationwide.

I was looking at the list of judges appointed by the Trump administration a while back, and I was struck by the fact that they are still dominated by graduates of Harvard, Yale, and the rest of the Ivy League. I think that, while they might be "conservative" compared to their classmates, they are probably mostly pretty centrist or even a bit liberal compared to the average Republican.

They are also very strongly associated with the Federalist Society and have been run past folks like the Heritage Foundation to check their records, as NPR and such have howled.

There are even-- gasp!-- OBSERVANT CATHOLICS!!!!
Which those horrible, horrible Republicans won't recognize is CLEARLY a disqualifying characteristic.

Tim, I don't think I disagree with you. Hence, my comment that I don't expect my politicians to be anything other than greasy weasels.

Give them limited power and let the rest of us get on with life.