The Desert Sky At Night

... is better than the mountain sky at night. Well, at least when it's the Anza-Borrego Desert vs. Palomar Mountain.
I did my fourth attempt at night sky photography last night and hit two places - a lookout point on Palomar Mountain and a spot out in the Anza-Borrego Desert. Palomar turned out to have a surprising amount of light pollution and the stars never really got crisp. The desert was spectacular. You could see the Milky Way with your naked eye, despite the presence of a slight haze and some light pollution from nearby towns.
Someday, when I feel like I've got the hang of the camera settings, I want to try central Nevada. There are spots out there that have no more light pollution than the middle of the ocean.
I was a bit more prepared this time, but I still struggled. This time, the issue was focus. I did this trip alone, so I didn't feel bad taking my time, trying one experiment after another. Wife kitteh is patient, but not infinitely so.
First off, you can't see a bloody thing using the view screen on the back of the camera. I brought along a laptop, so I would shoot a bit, keeping track of the settings in my head, and then stick the memory card in the laptop to see what I got. It took four experiments to get the focus close.
Each experiment, I'd start with the manual focus ring at a particular point and then shoot five shots, rotating the ring 90 degrees each time. After looking at the photos on the laptop, I'd move the ring to what I thought was the best of the lot and then do it again. It was surprisingly difficult. I really need to work on that skill at home, in the light. My lens doesn't seem to have a focus length readout, so I'm shooting in the dark, both literally and figuratively.
My photo settings, 20 second exposure, aperture as wide open as possible and ISO of 800 were pretty good. At the very end, I tried a set with ISO settings from 100 to 1600 and I think the 1600 performed the best.

Improvements For Next Time

Despite my improved settings and improved camera, I had to doctor the photos in Photoshop. I played with the pixel brightness curves, but nothing else. I've found that those pump up the hidden elements of the sky well enough. All of three of these came from the desert. I left them quite large, so I think they're worth a click.
Enjoy! 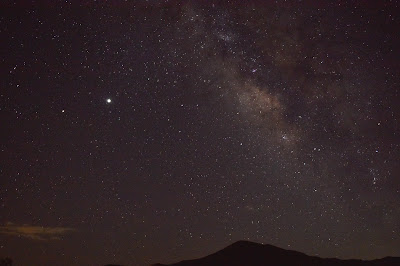 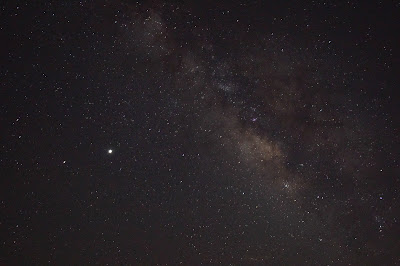 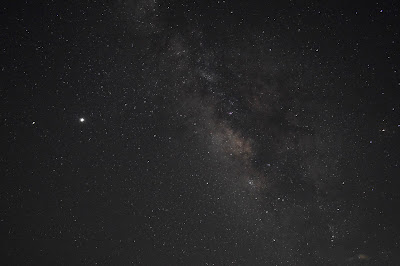 Wow, I think those are excellent. One thing puzzles me, the focusing, don't you just set it on infinity for that distance? Did you try any with auto focus? Doesn't your camera have a view finder? I hate trying to compose etc on those little screens, give me a decent viewfinder any day, you can see exactly what you're getting, most important!

I remember back when I was 10 or 11, we took a trip to Colorado, renting a popup camper for the trip. I have such wonderful memories of that.

The most vivid I have is camping along a Mountain stream in the middle of nowhere. Camp was setup near a mini-butte (50x50x50 almost cube like rock outcropping). And as good as just looking up in front of the camper was; just walking around to the back side of this little hill was amazing. The entire milky way appeared before my eyes. That was the moment I started thinking of being an astronomer. Of course, I never did that, high school physics class cured me of that dream.