Of Moons And Lunacy

Following the excellent, recent advice of Tim Eisele*, I shot the moon last night. Well, actually, I shot it many times, but with my new Nikon D3500 Artillery Piece and it's 300mm telephoto lens.
Almost all of the photos came out horribly.
The problem is my inability to focus. No, not my penchant for Pachinko posting here, where topics bounce all over the place, but my old eyes' inability to focus on much of anything without glasses. Taking his tip on manual focus with insect shots where he blasts away while changing the focal length, I did the same trick, blasting away while making small adjustments to the camera lens.
I managed to get one semi-decent shot, but it was at the beginning of the sequence, indicating that I needed to overshoot the focus on both sides of the adjustments. I left the photo rather large, so I think it's worth a click. 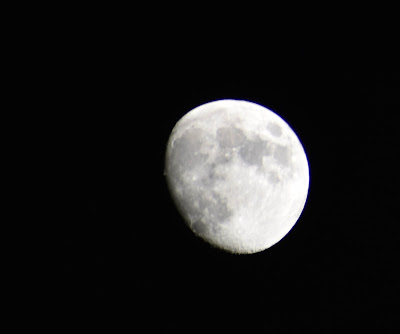 My goal with this photography is to get myself educated before I go out to the desert to take some more Milky Way photos. I'm learning, slowly.

I have to admit to a certain amount of pleasure watching the blue civil war evolve. We've gone from Jefferson Davis and Robert E. Lee to Thomas Jefferson, George Washington and Christopher Columbus to General Ulysses S. Grant to Abraham Lincoln and now ... to elk.
Yes, elk.

Somewhere up in Heaven, Jefferson Davis is giving Abraham Lincoln a wry grin and shrugging his shoulders, saying, "Dude, you might as well have let us be." And yes, Jeff is in Heaven. If you don't think so, you're a racist. After all, Barack Obama said sin was being out of alignment with one's values and old Jeff might have been a lot of things, but he wasn't out of alignment with his values.
I thought the Lincoln statue removal was the craziest thing, but now the official Democratic Party Twitter account and the NYT are taking stands against Mount Rushmore. Wow. Can it get worse?
Yes. Elk. Because elk.
Maybe the elk was racist. Maybe the elk held slaves. Maybe the elk wasn't sufficiently pro-black. Who knows? Who cares? This has become so deliciously surreal that you almost don't care what they destroy next.
* - When isn't his advice excellent?
Posted by K T Cat at 6:40 AM

Yep, that's the moon, all right.

One weird thing I've noticed is that, when I look at the moon with my naked eyes, I can see the "Man in the Moon" pretty easily. I see him looking at something over my left shoulder with a horrified expression. But, in photographs, I can't see him unless I shrink it way down and make it blurry. I guess excessive details just distract from the overall impression.

It's been a while since I've done moon photography (and that was mostly back in the film camera days), but when I did, the big blurring problem was that if you don't track it, the image smears over surprisingly short times, and it gets worse as the magnification goes up. I used to have to use 3200ASA black and white film in order to get a fast enough shutter speed to keep the motion blur down, and "Sky and Telescope" used to constantly have articles about "hypering" your film to get the exposure times down even further. You've probably noticed that if you get your telephoto all lined up on the moon, it slides out of your field of view quite quickly. In your picture, there is some rainbowing near the terminator that looks like it might be from motion blur. I think you are also getting washout from the sensor oversaturating on the bright regions, because your camera is trying to set the exposure based on the overall brightness of the field and not just on the brightness of the moon. Maybe you could also try bracketing with shorter exposure times?

You make a good point about the motion of the moon. I'll try a faster shutter. After all, the only thing I need is some amount of contrast in the pixels and then I can use Photoshop to make it pop.