Someday, I Hope To Be Worthy Of The News Media

The George Floyd thing is going to happen again. In a country of 330,000,000, there's no way it can't. The question is whether or not we'll go through another series of riots. They key to the question is the news media.
If their dominant narrative is that we Americans are racist, we're going to see cities burn all over again. If the dominant narrative is that we're pretty cool with the whole skin color thing, then the tragedy will be seen as an isolated incident and reporting will be local like it is for black-on-black murders.
Me, I thought the George Floyd killing was just some Minneapolis cop rando offing a Minneapolis black rando. For all I know, George was on meth and the cop knew it. Or maybe the cop was hyper-aggressive and liked to show alpha dominance over suspects. Or maybe he suffered from cop-PTSD and flipped out. Or maybe it was racial and the cop wanted to stomp on a black.
The news media knew. They knew it was symptomatic of our systemic racism, another example of America's 400 years of racial sins. They picked up the George Floyd ball and ran it into the end zone for a 6-burning-city scoop-and-score. Hooray for the news media! They're so wise and righteous!
So the question for us is: How can we earn the news media's approval? Each one of us needs to ask ourselves this question. Our primary goal from now until the next one of these needs to be to convince them that we're not racists. Everyone needs to pitch in and work our hardest.
Yesterday, here in San Diego, our local kids engaged in performance art, trying to show the media how anti-racist they were. They lined one of our main streets in my little burg, waving signs and chanting. I'm posting it here in the hopes that their valiant efforts will be noticed by reporters, editors and news anchors. Please, if you know any of them, forward this on to them. Like I said, this is all of our jobs now. 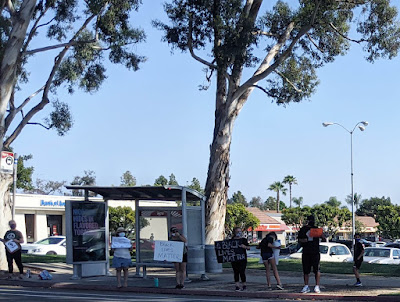 I know I'm dripping with angry, sarcastic, sneering, fake praise for the news media, but I'm not kidding about what is happening. Until they decide we're worthy, our cities will be burned and looted. Think about it. Why was the Minneapolis Mayhem a thing? Why wasn't it like the murder of Shanon Seward? The answer is that the news media weighed us in the balance and found us wanting.
We need to find an answer to this and soon, preferably before the next incident. Ask, plead, beg your local news media to tell you how we can at least get to the point were they deign to look upon us with only mild distaste instead of outright disgust.
Well, either that or we need to buy guns and ammo, especially if we live in blue cities. After this last week, if you get attacked by a mob and can't defend yourself, that's on you. Victimized by out-of-control rioting once, shame on you, victimized twice, shame on me.

looks like NYC this is your liberal leaders for ya @nycmayor #FireDeBlasio #GeorgeFloyd blasio's daughter arrested & he says he's proud of her for acting like this. buy $SEGN pic.twitter.com/0qr51qJxfJ

Remove the perverse incentives, that is, take away the ability of government bureaucracies to profit by the fines and penalties they impose, and most of the problems with "the police" will solve themselves.

Here is one way that can be done --

For example, property taxation is almost universal. If a county is scheduled to raise $10 million in property taxes, and the total fines and penalties imposed on the citizens of that county for that year somehow also amounted to $10 million, then no one would have to pay property tax that year, and the county would still have the amount for which it had budgeted.