We took the Catican Guards, including our ancient chihuahua, Pepito, out on maneuvers at a local school this afternoon. Perched on the fence was this charming raptor, a red-shouldered hawk. 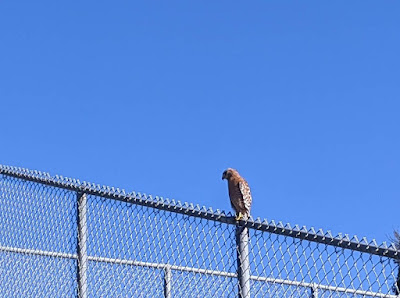 Local birds of prey are usually pretty timid, so I figured he'd fly away as I got closer, but he let me get within 10 yards of the fence. I didn't want to bother him, so I didn't get any closer. Below is a better photo of one of his cousins from a different website, excerpted below. 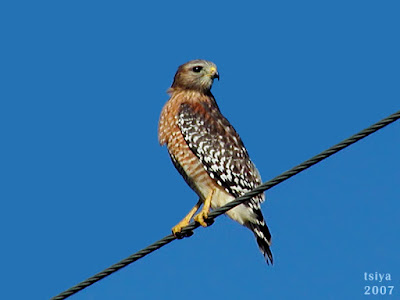 Red-shouldered hawks search for prey while perched on a treetop or soaring over woodlands. When they sight prey, they kill it by dropping directly onto it from the air. They may cache food near their nest for later consumption. When in clearings, they sometimes fly low to surprise prey. Red-shouldered hawks, like most raptors, have very sharp vision and reasonably good hearing, with talons capable of killing animals at least equal to their own size. Small mammals are typically the most important prey, especially rodents. Voles, gophers, mice, moles and chipmunks may locally be favored based on abundance. Slightly larger mammals, such as rabbits and tree squirrels, are also occasionally preyed on.

Whew! Nothing in there about preying on geriatric chihuahuas. I think Pepito's safe.
Posted by K T Cat at 3:37 PM