I didn't want to do one more post about that dumpster fire of a Democratic debate, but everyone is missing the biggest point that I had to write this.

Pundits are suggesting that it was a huge mistake for the also-rans to savage Mike Bloomberg and not go after Bernie. It wasn't. It was absolutely mandatory. Mike is an immediate, existential threat to all four of the second-tier candidates. Their campaign managers aren't fools and they all saw what was about to happen.

Presidential campaigns don't die because of lack of support in the polls, they die because they run out of money. Tom Steyer gets about as many votes as the write-in campaign for Donald Duck, but since he can self-fund out of his billions, he'll be in the race until Milwaukee. Far more valid candidates like Cory Booker and Kamala Harris had to drop out because their donors turned off the money spigots.

Mike Bloomberg's entry into the race turned off all the money spigots for everyone but Bernie. His legion of manic followers will keep him going. No one else has that kind of grassroots support and so they all must have wealthy donors ready and willing to make payroll. Once Bloomberg's ad campaign gained traction and he passed them in the national polls, it made no sense for some mid-level Democrat fatcat worth $73M to pit his money against Bloomberg's $60B. Bloomberg was spending more than the fatcat's total net worth every month.

I would bet that Warren and Klobuchar have enough dough to meet expenses for a week or two and after that, they're going to have to cut staff. They had to smash Bloomberg so their donors would open their wallets again. If they didn't, it was game over. 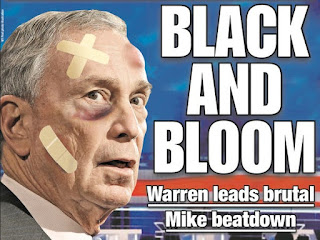 Bonus Take: Future debates won't get any better for Mini Mike. He didn't have any good answers for the racism and sexism questions from his opponents because there aren't any. He's simply a racist and a sexist and there's no getting away from that. For every one particular quote he can explain, there are a dozen more waiting to be thrown at him.


While billionaire Michael Bloomberg is already spending about $156 million on TV and radio ads across the 14 states that weigh in on March 3, neither former Vice President Joe Biden nor former Mayor Pete Buttigieg had invested in a single Super Tuesday commercial as of Thursday night, according to ad tracker Kantar/CMAG.

Sens. Amy Klobuchar and Elizabeth Warren combined have put less than $2 million into Super Tuesday ads. Of the six candidates in Wednesday’s Democratic debate, Sen. Bernie Sanders is the only nonbillionaire with a major paid-media presence in those states, with $11 million in ads.

They're out of money and if they don't knock Bloomberg out of the race right now, it will be too late even if their donors turn on the money spigots. It might be too late anyway as Bloomberg will be toast, but Bernie will have racked up massive Super Tuesday wins.
Posted by K T Cat at 6:15 AM

For once I completely agree with you.